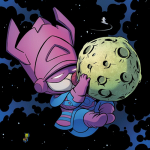 Lord Akiyama is an American of Filipino heritage, though his roots also trace back to Great Britain and Spain. He is talented in The Seven Deadly Sins: writing, drawing, reading, watching, gaming, eating, and sleeping. He is also chubby, lazy, and in his late-twenties with a love for art and animation.

Lord Akiyama was introduced to Total Drama Island by a friend and has been hooked ever since. He has written a couple fan fiction stories and has tried his hand at doodling in the design style of the show. His favorite character is Gwen and is a strong supporter of the Gwen and Trent relationship. His other favorite characters include Bridgette, Izzy, Chris Maclean, and most recently Bruno.

He is the author of the very popular Total Drama Academy series, which is currently in Year One, along with the spin-off Return to Total Drama Island, Total Drama Action Redux, and the one-shot Smell. He and Kobold Necromancer are good friends and have often inspired one another's work.

Sakaki as Mai from King of Fighters

Daisy as Christie from Tekken

A birthday gift for Kobold Necromancer

Lord Akiyama's favorite couple
Add a photo to this gallery

Retrieved from "https://totaldramacomeback.fandom.com/wiki/User:Lord_Akiyama?oldid=12214"
Community content is available under CC-BY-SA unless otherwise noted.