Tyler Kenard is the Sporto (or Jock, just don't say he sucks at them as well) of the TD world. He competes in the TDC/B challenges, doing his best regardless of discouragement.

Tyler loves sports. He considers himself a pro-level player in hockey, football, basketball, tennis, gold, cricket, handball, shuffleboard, badminton, bocce ball, horseshoes, thumb wrestling and a few more he couldn't think off off hand. Unfortunately, his many coaches have different opinions of his skill level. Tyler loves anything that involves throwing, catching, hitting, bouncing or a combo of all the above. His gym teacher consistently gives Tyler an E for effort, but always keeps the First Aid Kit handy. He thinks that Tyler has a lot of enthusiasm and drive, but that talent and coordination are not his strong points. Tyler is competitive, but prides himself on his friendliness, too. When he's not throwing a ball back and forth, he can be found hanging out with his many friends. Tyler is stoked to be a part of Total Drama Island. He loves the fact that there will be a variety of wild challenges to test his skills, so he's psyched! While he may never be a real pro, he always looks the part. Thanks to his rich and famous sportscaster Dad, (who is totally hooked up with all the major sponsors), Tyler is always outfitted in top-of-the-line logos. Tyler's Dad is proud that his boy made it onto the show and expects him to WIN! WIN! WIN! Tyler is under a lot of pressure, but isn't worried. He feels he'll do okay. If nothing else, he'll look swank in those track suits.﻿

Tyler's entrance in TDC was a rather shocking one, where he was not wearing any of his sportswear. He was glum and wearing a Hawaiian shirt among common clothes, and did not have the drive; however, he was still defensive towards his abilities. When Courtney upset him, he started a shouting match with her and Duncan. He was an outcast, but befriended fellow outcast Ezekiel.

After talking to his new friend for a while, the two were inspired to try their best in the challenge. While Tyler was injured (and received CPR with tongue from Lindsay), Ezekiel won the day. Thus the two were good friends from that day on, confiding in each other over emotional issues and competition drive.

Eventually, Tyler admitted to Lindsay why he lost most of his drive. His mother, who had left his family some time ago, had come back after TDI. She was furious at how Tyler had "humiliated" himself, and demanded that he give up sports and everything else he likes because of how embarrassed she was over her son's performance. She called his school and got him banned from all the sports activities, and thus caused a great strain on his self-esteem. However, Lindsay managed to cheer him up, and he eventually got his groove back, but then she was eliminated from the game too.

Tyler continued to compete as strongly as possible, but eventually lost the game entirely in the strikers challenge, which was the most humiliating thing he thought possible. His reunion with Lindsay managed to cheer him up immediately.

In TDB, Tyler has become competitive all over again, making new friends and continuing to be best of friends with Ezekiel. His relationship with Lindsay has been steady and true. As he progresses through the contest, his mind is not solely on the competition. He is also trying to help Gwen, who is obviously distraught about something from home, but she isn't talking about it and is becoming more and more surly

Tyler has only had a relationship with Lindsay, which has survived his funk in TDC. The two are close to each other, emotionally and physically.

Even though Tyler hasn't shown any romantic interest in any other women, there's been teases about him and Ezekiel. Also, Izzy has seen him naked and has loved it.

Tyler has survived the Zombie and Giant Monster VR Challenges.

In the Vampire challenge, Tyler tried to use the Holy Hand Grenade of Antioch but accidentally killed a couple of his teammates, then was thrown out of the tower by Count Dracula. In the Alien challenge, he was thrown at the aliens by Chef Hatchet and killed by them.

In the Super VR he was the hero Super Sporto. His powers were athletic perfection ("I've got the speed of an Olympic sprinter and the crushing power of the best quarterback!") and summoned sport equipment that used as weapons. He along her partner Head Cheerleader (his girlfriend Lindsay) fought against Dark Arrow (Ezekiel) and Eviscerator (Heather), coming up victorious. Later, they, along with Dreadlock Kick (Sebastian) and Scaredy Cat (Sakaki) went to the underground location of the GPA, only to find that other villains were already there; Tyler was the first to be defeated by Cthulhu Junior/

Tyler with his girlfriend, Lindsay. 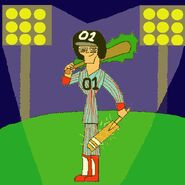 Tyler's superhero identity, Super Sporto.
Add a photo to this gallery
Retrieved from "https://totaldramacomeback.fandom.com/wiki/Tyler?oldid=16017"
Community content is available under CC-BY-SA unless otherwise noted.