Mandy Raptorclaw, labeled The Cutie Cultist, is a contestant on Total Drama Battlegrounds. She is a Cthulhuist with a desire to see the world destroyed, but really (really!) a good girl deep down.

She's in that phase that parents hope she grows out of fast. Her siblings wonder how they could be related to her. She eats alone at school, her teachers are afraid to call on her, and she is banned from most school events.

Mandy doesn't care what people think of her, why should she? One day, it'll pay off to have her devotion to the Old Gods, like C'Thulu, Yig, Ithaqua, and Harvey the Wonder Hamster (no one has yet to tell her that the last one is not an Old God).

She always goes on about sacrifices, how she'd love to find the perfect mortal for awakening the Old Gods. However, this is where the cultist in her ends, and the sweet yet troubled girl is revealed. Mandy cannot bring herself to harm others, not even animals. She wanted to sacrifice rats at first, but couldn't hurt them, and now has about twenty pet rats that she cares for lovingly.

Her clothing and choice of make-up are all off-putting to most: the red contacts, the abundant eye shadow, platinum-dyed hair in a terra twist, her skull earrings and choker, pants with revealed skin where pockets should be, frayed gloves, and the black star tattoo on her right arm.

Probably more off-putting is her sacrificial dagger, as well as a couple other small knives she keeps on her person. She loves to make threats with voodoo dolls, which she claims is a "side-religion" that helps in revenge.

But who exactly is Mandy, who is the real person behind the cultist look? Will anyone see her for more than the pentagram-painting freak she shows herself as, or will she be left alone in the dark, barely seen in the flicker of blue-fire flames from the candles? Just how long will the others tolerate the short, cute, talkative, dark and arcane girl?

﻿When Mandy arrived at TDB, she cackled and declared everyone's doomed fate... and then tripped over the sleeping Alfred. She was very outspoken and furious from the beginning.

In her first challenge, she was to go against Izzy, and the two girls were staring each other down with all the intent to tear each other apart; however, Chris Maclean unintentionally turned the possible rivalry into friendship as they worked together for the challenge, and thus became good friends.

Following up in the next challenge, she started to feud (one-sided) with Hannah, believing her to be Hollywood stereotypical Christian; however, when Hannah saved her life and continued to be nice to her, Mandy felt terrible ashamed and apologized. She was defensive of her new friend, outraged when she was voted off.

Mandy, for the most part, has been dealing with her new friends (which she hasn't had for a long time) and her growing romance with Alfred (see below.) Mandy also deals with being a cultist and proudly (and very loudly) declaring what she plans on doing in challenges. She shouts a great deal, putting gusto into most everything she does.

Mandy's sexuality has been challenged by many people, though she is attracted to boys (but not hunky boys like Justin). Nevertheless, her main pairings are with Alfred, Izzy, and Hannah.

With Hannah, Mandy started off hating her, believing she was an overly preachy Bible thumper; however, this all changed when Hannah saved her life. Afterwards, Mandy became friends with the sweet girl, though several incidents (some caused directly by Mandy) caused people to think they were romantically and/or physically involved. Still, they are only friends, Mandy thinking highly of Hannah and as her guardian angel.

Izzy and Mandy became good friends real fast into the show, and hung out together. When they were discussing fan service with Alfred, Izzy wanted to prove yuri fan service to the viewers, and kissed Mandy. This went on for a couple seconds, and she didn't seem too disgusted afterwards; however, she still insists there is nothing between them like that. Izzy has insisted that Alfred pursue Mandy in hopes of pairing up her friends.

Alfred is the true love interest for Mandy. Even though they started off in a Zombie vs. Vampire feud, the two were drawn together, mostly by Izzy's hand. Though they made out a few times, Alfred has taken to courting Mandy the normal way. He asks her stuff that no other boy has ever shown interest in, like her rats and her personal life, which is flattering to her. So far, she is still interested in Alfred but withdrawn.

Mandy has survived the Zombie and Vampire VR challenges.

In the Alien challenge, she was locked out of a safe room by Chef's stupidity, and killed by aliens before the people on the other side could open it. In the Giant Monster challenge, she was crushed by a building knocked down by the giant platypus.

In the Super VR, she and some other villains were cornered by the heroes, so she sacrificed her teammates to summon Cthulhu Jr., a very powerful representation of the Old God. While this monster did take out four superheroes, it was powerless to Bridgette and her ability to control water creatures, and thus the surfer girl hero took the beast and Mandy out.

Mandy in the Bible Black school uniform, by Lord Akiyama. 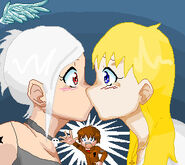 Sketch of Mandy by Cid-Vicious.

Gnome Warlock from World of Warcraft, TKN's first character and inspiration for Mandy.

Mandy being... playfully harassed by Izzy.
Add a photo to this gallery

Retrieved from "https://totaldramacomeback.fandom.com/wiki/Mandy?oldid=14420"
Community content is available under CC-BY-SA unless otherwise noted.