Leshawna Olongola is the Sister (or Loudmouth, but she doesn't like that title) of the TD series. She's strong on the competition and sweet with her friends.

Leshawna is one bootylicious shortie! She is large and in charge and everyone else might as well pack it up and go home "cause she came to win." She is as street smart as they come but put her in the woods and the girl is like a fish out of the water. Back home she can often be found strutting the halls at her school, rolling with her girlfriends and giving anyone who throws attitude her way all kinds of trouble. While most know better than to be gettin' all up in her bizness, there's always some clown who didn't get the memo. What Leshawna lacks in social graces, she more than makes up for in community service. She's a natural born leader, so she's always on the look out for troubled teens, which is why she volunteers three times a week at The Community Centre. To them, Leshawna's like a big sister. It's a role she enjoys since she wants to make sure they stay out of trouble and off the streets. And like her high school homies, her surrogate siblings learned pretty quick that they can't pull one over on their Big Sistah! When one of them used her do-rag as a dish-rag, LeShawna taught him the valuable lesson of how to check himself before he wrecked himself. But underneath all that attitude lurks a heart of gold, which is why Leshawna auditioned for Total Drama Island. She wanted to be a role model for kinds on the street and show that anyone can win if they give it their all. Trouble is, there ain't no street in the wilderness - just lots of trees and tons of mosquitoes. But Leshawna is excited to see how she'll go from "the hood" to "the wood"...and hey, now that she's here, she's here to win, y'all! Leshawna would just like to say that she represents and she's not ABOUT to go home early.﻿

Leshawna was a strong competitor as long as she was in TDC. Her most prominent characteristic was how she was a good friend and moderator to most of the others, one of the most mature people on the island next to Bridgette. She was teasing and friendly to most, even Courtney, while strict towards people like Heather.

However, her stay was short-lived, and was voted off by Courtney to make Harold miserable. She did not stay still at Playa De Losers, and worked with the others to make the intentions of those voting people off known. When Harold was poisoned with Gummi Slugs, she hijacked the Boat of Losers to be by his side. She likes Dj, Lindsay, Cody, Izzy, Owen, Tyler and some of the others, she's closer to Bridgette and Gwen, but she loves Harold.

Leshawna has thus made things difficult for Courtney and Duncan, not fully accepting their apology. Eventually she lightened up, but is still strong and stubborn over the whole ordeal.

In TDB, she is once again full-force in competition. She's still dating Harold, and keeping her friends close. Her best friend back home, Jasmine, joined the show, but when fame went to her head, Leshawna couldn't deal with how arrogant she became; she did miss her when she was eliminated.

Leshawna has been into Harold since their hook-up in TDI. Harold continues to shower her with loving affection, and she returns it by getting into his hobbies. He has visited her family, most of which like him, which is important for her as she is close to her family.

Recently, Leshawna has been wondering just how well she and Harold could do. She also teases Bridgette about liking Harold. Still, she's close to her nerdy boyfriend, and is protective. Since Harold has forgiven Courtney, Leshawna isn't quite as harsh towards her.

She has flirted a little with Xander, but not much has developed since then; at the least, it shows they work well together.

Leshawna has survived the Vampire and Giant Monster VR Challenges.

She was part of the group that took down Count Dracula on her team (Gwen and Anita). And even though she was defeated by Cthulhu Jr. in the Super VR, she managed to defeat the leader of the villain team, Chef Hatchet.

In the Zombie challenge, Zachary and Owen were fighting over the grenade launcher, and accidentally blew up Leshawna (and Sebastian and Sakaki). In the Alien challenge, she was mortally injured by aliens and stayed behind with Groucho to delay them as long as they could so the others could escape, and perished as the spaceship exploded. 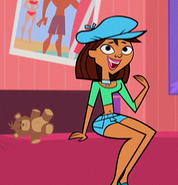 To say Heather and Leshawna don't get along is an understatement.

Leshawna with her boyfriend, Harold
Add a photo to this gallery

Retrieved from "https://totaldramacomeback.fandom.com/wiki/Leshawna?oldid=16509"
Community content is available under CC-BY-SA unless otherwise noted.