An inventor, a joker, a very level-headed guy who's gosh-darn sweet, calm, and ready. He'll fix your computer, he'll fix the sink, and he'll do it without charge. People like him, aside from the fact that he accidentally blows things up, and he smells like smoke and oil most of the time.

The young inventor is a living shop class of creativity, and he excels in math and art as well. Joel loves to invent, more than anything, and his parents' garage is practically his room; he sleeps there more often, he couldn't get oil on the bed sheets, now could he?

Joel has a collection of hobbies and loves: bad movies, sketching, song writing, piano playing, first-aid (he needs it from time to time), and TV. When he saw Total Drama Island, he was instantly taken and desired to get on the show. The producers were so impressed with his audition tape and delivery (he flew it to the headquarters in his handmade copter), that they signed him up to work on the set of Total Drama Comeback.

Some would say that Joel's early introduction was unfair for the other contestants, but he believes it'll be a handicap. Either way, he gets along splendidly with most of the others, even though they do fear how a lot of his stuff does blow up. He and Cody are already swapping robot designs.

Joel may not look it, mostly because he looks like a dirty mechanic with a lazy smile, but he is also a romantic at heart. TDB is going to feature a virtual reality for many challenges, and that's heaven for him. Inventing and competing without fear of an apocalyptic explosion ruining the world? Attacking Eye Creatures, that's awesome!

(The weirdest thing about Joel are his weird exclamations. Most people don't get them, but some might...)

Joel leaves his supportive family and earnest schoolmates, all wishing the best for him. Will the soft-spoken and loud-explodin' inventor get far? Will his time on Total Drama Comeback constitute for anything? And will, in the name of Rex Dark: Eskimo Spy, he get paid for all the repair work Chris Maclean is obvious going to need on the set?

Joel debuted into Total Drama Comeback on Day 10, after delivering his audition tape (and waking the campers up in the process). He then cooked a delicious breakfast for the cast. Throughout TDC, he helped with the technology and electronics of the show.

When he debuted in TDBG, he literally teleported onto the stage. Joel was a big hit with the veteran contestants, as they all knew him and liked him. The inventor was also very handy around the show on all sorts of instruments, including the incredibly powerful Vera, the Virtual Reality machine uses in the VR Challenges (see below).

Joel was very pleasant to everyone, and also fell for Hannah. Alfred helped him court her, and it was obvious that as stoic as Joel could be, attacking Hannah was his berserk button. This made him aggressive towards Colin, Chris, and the producers, who were delighting making things difficult for her.

When the Alien VR ended in a great big nine-way tie, the producer demanded Joel be kicked so that Hannah could not be seen on the show anymore. This infuriated Joel and, with stoic coolness, told Chris that he would no longer help the show in any way after the way they treated his girlfriend. Thus, the show is on a wire with its electronics (not literally), and Joel has been seen with Hannah on the Bus of Losers and having fun outside the show.

Joel's sole love interest has been Hannah, who he fell for very quickly upon the start of TDB. He was helping her through the discrimination she faced, due to Chris and Colin. He would go the extra yard and retaliate to those who harassed her, like hacking into airport security's terrorist list to make them think they all were terrorists.

The two grew closer, and when Hannah attacked Colin when he was threatening Rodney, he comforted her. This ended in their first kiss.

Joel is the creator of Vera, and thus has to create every scenario. He also thought up of all the possible variables, like different monsters in the Giant Monster scenario.

He only survived the Vampire challenge, regardless of creating every part of the challenges.

In the Zombie challenge, he was overpowered and killed by zombies in the background, his death unknown until after the challenge was done. In the Alien challenge, he sacrificed himself by detaching part of the spaceship from the main, and activated the self-destruct while still on it to destroy most of the aliens.

Another version of Joel by Cid-Vicious. 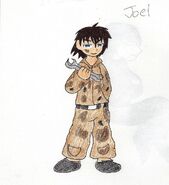 Joel from MST3K, a very big inspiration for our Joel. 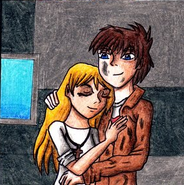 Joel with his girlfriend, Hannah
Add a photo to this gallery

Retrieved from "https://totaldramacomeback.fandom.com/wiki/Joel?oldid=14410"
Community content is available under CC-BY-SA unless otherwise noted.