Howard has four sisters, three older and one younger. They always had their friends over, and young Howard grew up surrounded by girls of all kinds. Thus, he really likes the ladies! And yet he still doesn't know how to convey it properly.

He's been doing a lot of things to try and get in touch with his feminine side, like take dance lessons. That's really helped his flexibility, while knitting has helped his video gaming hands. Being able to cook helps him take care of his meals. He's even read the Twilight series to know what's really got the girls talking.

Howard is perfectly capable of talking to girls, but he gets overly excited when he meets a pretty girl first time; thus, he usually blows the first impression. Usually a friend or one of his sisters will drag him off to prevent further embarrassment. It's for his own good, really.

The ladies' man who doesn't have any ladies to brag about (yet) is also a guy's guy. He loves hanging out with his buds, and usually, he hangs out with those who aren't part of the "crowd." He's befriended jocks, loners, band members, bookworms, transfer students, fellow "ladies' men," and actors. A good peacemaker, he also moderates peace at home.

Having watched the show, Howard feels for Cody, and plans to team up with the tech-geek, being his wing-man. He actually has no intention of winning the show, he just wants to have fun. And fun he shall have, because the naturally-happy boy is gonna be like a kid in a candy store.

So will Howard win a girl in the end? Will he end up getting his face slapped, his groin kneed, his stomach socked? Maybe he'll just be helping someone out in finding their dream gal instead of getting his instead? It's all a matter of time, and he's actually considered all this; he's wearing a cup.

When Howard entered the game, he started to flirt with all the girls right away. Only an abrupt slap from Belinda stopped him, which surprised him since he hadn't said anything to her yet. This made him focus on her throughout the challenge, and following.

Howard was never into the contest, he was into the girls, but that didn't cause him to lose all sense; he went with Alfred instead of allying with the manipulative Sandra. His primary focus, however, never stayed on target except for the ladies.

Eventually, Belinda had to turn him down, which upset him. In the same challenge, he was voted off for his perverted behaviours wanting the girls on his team to kiss for fan service and pushing the matter, but luckily for him, Jasmine, whom he had become friends with, was there to comfort him.

Later on, he was shown to have hooked up with Jasmine on the Loser Bus.

﻿Howard has been interested specifically in two girls (fleeting for all the rest): Belinda and Jasmine .

His interest in Belinda started since his very arrival, and he nicknamed her Foresight. As the show carried on, he continued to flirt with her, aim to get her attention, and court her in every way he could think of. She, much to his sorrow, told him during the boat race that she wasn't interested, but would help him court someone who she thought would be a better catch.

That someone was Jasmine, Leshawna's friend. Howard had befriended her early on in the show, loving her passion for acting and drama. When she was voted off early, he promised to see some of her plays, which sincerely flattered her. When Howard was voted off, she comforted him and soon, the new couple were making out on the Bus of Losers.

Howard did not survive either of the VR Challenges he was in.

In the Zombie challenge, he was knocked into a dopey state, and torn apart by zombies when left alone because Owen and Zachery failed to protect him. In the Vampire challenge, he fell into Dracula's basement, and was torn apart (again) by vampire rats.

"So far in this show, three hot chicks have been voted off, and that's just wrong." - TDBG, chapter 19. 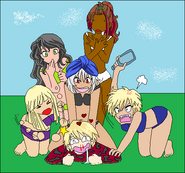 Howard getting caught peeping and faces the wrath of Hannah, Anita, Daisy, Mandy, and Carol by Pokemon123Love

Howard by Constorion89
Add a photo to this gallery

Retrieved from "https://totaldramacomeback.fandom.com/wiki/Howard?oldid=14409"
Community content is available under CC-BY-SA unless otherwise noted.