Gwendolyn "Gwen" Ingrid is the Goth Girl of the TD series, and continues to compete (grudgingly). She was the runner-up of TDI. She also competed in TDC/B. She is one of the original 22 campers.

The daughter of a single mom, Gwen was a latch-key kid who grew up taking care of her kid brother. That's cool with Gwen, because she likes helping out her Mom, and has tons of fun with her brother, too. Like the time they put a bunch of beef bouillon cubes into the Community Pool. The only other thing that Gwen likes is to sketch. She is afraid of being buried alive and her favorite hobby is going downtown on the weekends and people watch. She's been told she's talented and hopes to make a career out of it one day. Gwen's the loner of her school, by choice. She doesn't need to hang out with a bunch of dorks just to feel better about herself and the last thing she'd do is follow a trend. Maybe a Trent... but never a trend. In fact, she wishes she never auditioned for Total Drama Island in the first place. She did it on a dare (to humor her brother) because she never thought they'd pick her. But now that she's been cast she figures she might as well make the most of it. Her plan is to play this thing out to the end just to prove what morons they really are. Besides, if she wins the $100,000 it would sure make life easier for her Mom. Gwen may seem tough as nails on the outside, but when it comes to her family, she's as soft as... well, a marshmallow! ﻿

Gwen has shown great animosity, and as the second person to arrive in TDC, she immediately got in Chris' face and threatened him to behave. Despite her grouchy disposition, she lightened up when friends and Trent showed up one by one.

She went through TDC by trying to spend more time with friends and aimed to eliminate Heather, but her frustration was increased when Leshawna, her closest friend, was eliminated early in. Also, Courtney's ranting got on her nerves and when she lashed out, she inadvertently caused the CIT to cause Trent's elimination. The worst part was Heather unleashed a clever plan to make it look like Cody had caused it, and in her anger, Gwen slapped him.

After Gwen learned the truth, she profusely apologized to Cody, and held the members of the alliance responsible for the travesty

(Heather, Courtney, and Duncan) with intense dislike. The memory of what she did to Cody haunted her, and thus her emotions were wild throughout her time on the show.

Eventually, Gwen was voted off on a technicality because she didn't technically do anything, and said good-bye to everyone, leaving by kneeing Chris as hard as she could in the groin.

In TDB, Gwen has since the very beginning been incredibly moody, much more than normal. She has become snappy at even her friends, prompting arguments with Trent, Bridgette, and others. She also threw a fit when Trent was voted off, and suspected it was the same people responsible in TDC.

So far, only the thrill of the contests and her conscience have kept her attitude at bay. Tyler has continuously tried to reach out to her, but been shot down. Only time will tell what is wrong with her.

Gwen has only been interested in Trent. Their hook-up at the end of TDI has stayed between the two all the way to TDB, and she has always displayed a great deal of emotion when he gets voted off. Their relationship is sweet and going slowly.

The only other love interests have been teases with Tyler, Duncan, and Bridgette. With Tyler, it's mostly just how he keeps coming to talk to her in TDB to try and get her to confess what's wrong, but nothing is happening romantically (and Tyler is taken).

With Duncan, it's mainly a friendship that's building after the anger she had with him in TDC, but they're just friends (and Duncan is taken).

With Bridgette, it is just best of friends that have kissed for the sake of competition (though Gwen has initiated both kisses with Bridgette, and the second, longer one caught the surfer by total surprise...) Sadly for the yuri fans (TKN) this is only a tease.

Gwen has survived every VR challenge she has ever been in (Zombie, Vampire, Alien, Giant Monster, Super). She is also the MVP in a couple of them.

In the Vampire challenge, she attacked Count Dracula and shoved the Holy Hand Grenade of Antioch down his throat, then calmly walked away before he was obliterated. In the Giant Monster challenge, she came up with the idea of Rodney befriending the giant platypus. In the Super challenge, she defeated Chris Maclean, the leader of the opposite team (not knowing he was a turncoat).

Gwen with her boyrfriend, Trent 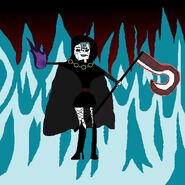 Gwen's super villain identity, the Grim Reapette
Add a photo to this gallery

Retrieved from "https://totaldramacomeback.fandom.com/wiki/Gwen?oldid=16873"
Community content is available under CC-BY-SA unless otherwise noted.