Daisy Robin, labeled The Tomboy Athlete, is a contestant on Total Drama Battlegrounds.

Daisy and her family cannot remember a time when Daisy wasn't a sports fan. Her pacifier had a baseball and basketball icon on it. Her favorite toy growing up was a hockey stick. Now she has a lacrosse stick, one that carries around with her and is taking it to this contest.

This is the kind of girl who has four brothers, three older and one younger. She played rough, she's broken a few bones when growing up, and is tough enough to endure injuries. Though she has the muscles and mouth of an athlete, she also is quite the warm person.

She hates anything girly, and plans on wearing a tux to her prom because of her loathing towards dresses. The color pink makes her flinch. But one thing she does tolerate are flowers, especially the ones related to her name. She blames her parents for giving her that name, and hopes her friends aren't aware the flower gardens in the front yard of her house are all cared for by her (she waters them at night).

Daisy is highly active. When not playing sports, or watching them while guzzling down soda, she is with her friends or her brothers, having some fun. High school is just one big team to her, though some teammates are not as preferable as others (and harder to trade).

Only two things can come close to Daisy's love for sports: amusement park rides, and boys. She's the one screaming in joy during roller coasters, and the one who does the courting when it comes to dating. Which makes Total Drama perfect, what with the wild rides that are sometimes part of the contest, and the hot boys. It's like a dream come true, with a cash prize if she kicks enough butt.

Daisy is sure of herself, and has all the confidence and athletic skill she needs. She's bringing her lacrosse stick to get it autographed, and to whack some upstarts with. So who's autograph will she get first? Who will get whacked first? And who, of the rough and tough members of TDB, will be her rival?

Daisy was introduced with much gusto, immediately going to Bridgette for autographs. During the first challenge, she threw her bout with Tyler to make him look better in front of everyone. She also was one of the people to stand up to Sandra's scheming and defend Alfred.

Daisy continued to compete with a mixture of tomboyish competition and fun-loving attitude. She also spent a great deal of time flirting with Yoshi, which seemed to confuse him a great deal. This reached a peak when she seriously injured herself during the fourth challenge, damaging her foot when trying to get the team's car out of a ditch. Though Yoshi did everything he could, the others voted her off.

She at first was in the hospital for her foot, but when the others came into her room in a flurry, she demanded they leave. When she was well enough to walk, she joined the Bus of Losers, and tries to see Yoshi when she can.

Daisy has had two love interests, one fleeting (Alfred) and one serious (Yoshi).

With Alfred, it was based off a friendship of helping each other out, and Alfred was rather cute in her eyes. Though when it was obvious she liked Yoshi, Alfred started to do what he could to hook the two up.

With Yoshi, it was a challenge from the start. Yoshi was there for competition and challenges, not for romance, and was sick of how lovey-dovey everyone was being. Also, due to his proud Japanese heritage and bad experiences with Zachary, he was confused why a black girl was hitting on him, an Asian boy. He remained confused while Daisy hit on him, attracted to his attitude, physical looks, and strong heart.

Eventually, Daisy won into Yoshi's heart, but after her injury, they could not be together on the show. She promised to see him more often, and since their separation, Daisy has continued to think of him and sneak back to see him. Though not much has happened between them physically, they have started becoming closer with every meeting.﻿

Daisy has not competed in any VR Challenges. 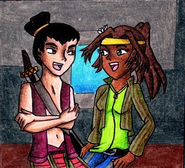 Daisy talking with her boyfriend, Yoshi

Daisy as Christie from Tekken
by Lord Akiyama

Cid's pictulre of Daisy, drawn for TKN's birthday
Add a photo to this gallery

Retrieved from "https://totaldramacomeback.fandom.com/wiki/Daisy?oldid=14423"
Community content is available under CC-BY-SA unless otherwise noted.