Courtney Satella is the Overachiever or the CIT on the Total Drama series. She competes in TDC/B. In the second season, her motive is revenge. In the third season, she strives for a combination of redemption and honest competition.

Courtney is very excited to be a part of Total Drama Island. She thinks it's the perfect stepping-stone on her path to greatness. She's a huge fan of competition. She's already a published author having written the award-winning book Total Triumph for Teens. Courtney has immense respect for anyone in authority; parents, teachers, the local crossing guard. In return, they all think she's a really sweet girl. She puts on a good face after all. Courtney also prides herself on politeness and courtesy because you'll never know who you'll meet on your way up the ladder of success, and Courtney plans to reach the top! While she feels strongly that we need rules in society for it to run smoothly, she also believes that you need to break the rules to get things done (or win). The theory is most evident that her bedroom is covered with trophies, ribbons, and plaques. She has never lost anything in her life. Her motto is "If you can't come in first don't come in at all." This is why she joined Total Drama Island, she feels it's a smaller version of the world. If she can win there than it proves she can win in life, which she already has, so she'll definitely win there - but still she'd like the $100,000 to prove it. When asked if she looks forward in meeting new friends as part if the experience, Courtney said she already has enough friends.

Courtney appeared in TDC trying to remain neutral; however, this went badly when she couldn't contain her anger towards Harold. It got worse when she argued with Tyler, and hit Ezekiel. As a result, he was given a bloody nose.

Throughout TDC, she tried desperately to get back at Harold by voting off friends and loved ones. As she carried on, her emotions got the better of her at times, feeling tremendous guilt for Bridgette's sorrow and the terrible incident with Cody over Gwen.

She eventually went too far and spiked Harold's food with Gummi Slugs, which caused a paralyzing effect (though she had no idea it was so bad because of Chef's odd listing of allergies). When Harold didn't go, she lost it and shouted him down, blowing her cover entirely. When Ezekiel convinced her to talk rather than storm off, she and Harold finally made amends. She also repaired the damage between Gwen and Cody.

She was the last one to be voted off before TDC became a free-for-all competition. Though she was glad to be reunited with Duncan, she had to avoid the wrath of Leshawna.

When she came back to TDB, she was determined to play fair but also win. Her emotions keep getting the best of her, getting very jealous of Gwen's friendship with Duncan. She also has been coaxed into voting for the mysterious person who is eliminating people via crafty means. Courtney has also taken to taking care of Rodney, keeping him away from the more sinful actions of the others and keeping him focused on studies in-between challenges.

Courtney let the pressure of the competition to get the best of her, often being mad yelling at her teammates for not doing good enough (like Katie during the MMORPG challenge). After a talk with Bridgette, she realized this, and tried to be nicer to everybody, as well as taking more active part in the challenges.

Courtney, though she would heavily deny it at times, has eyes only for Duncan. Her romance with him has stayed through the worst of the seasons, and has been hinted to be very physical (it has been confirmed by flashbacks and Duncan's own admission that they have at least reached second base). Despite she's dating a delinquent, Courtney seems to dominate the relationship.

Courtney is very jealous of Gwen spending time with Duncan, believing she is trying to seduce him since Trent has left; her friends try desperately to let her know that she's truly overreacting.

Courtney has only survived the Super VR challenge, .

Bridgette, Courtney's best (and some would say only) friend 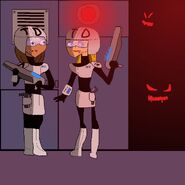 Courtney with Lindsay during the Alien VR

Courtney has sweaty feet while playing her violin shyly

Courtney has sweaty feet while playing her violin shyly

Courtney and Lindsay argue over who smells like feet

Courtney and Lindsay argue over who smells like feet 2

sweaty feety Lindsay
Add a photo to this gallery

Retrieved from "https://totaldramacomeback.fandom.com/wiki/Courtney?oldid=16687"
Community content is available under CC-BY-SA unless otherwise noted.