This article focuses on the interactions between Cody and Groucho the Duck.

Cody first met Groucho during Animals Crossing. The duck reminded him of the movie "Duck Soup" starring the Marx Brothers, so he decided to name the duck after the most famous of them, Groucho Marx. In his duck language, Groucho was already saying quotes by the famous comedian, and also hoarding weapons.

Because of his gratitude for being treated well, Groucho watched over Cody and the others. He killed a crocodile who was sent on them by the Jellybean Smuggler. He also, while Cody was carrying at him, shot at a rampaging moose. In the scavenger hunt, Cody presented Groucho as a dangerous weapon, and when the host laughed, the duck cocked his magnum revolver.

After the season was over, Groucho vowed to watch over the contestants.

Cody and Groucho still know each other, and of course Groucho watches over him and the other contestants. However, he stays out of the love triangle, as he has no idea how to help with that. 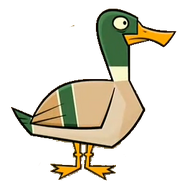 Groucho the Duck.
Add a photo to this gallery
Retrieved from "https://totaldramacomeback.fandom.com/wiki/Cody_and_Groucho?oldid=15065"
Community content is available under CC-BY-SA unless otherwise noted.