This article describes the interactions between Bridgette and Harold.

From what we saw on TDI, Bridgette and Harold were friends, probably the only friend he had when he was on the Killer Bass. Bridgette never participated in the pranks on Harold, and she was never unkind to him. The two also seemed to work well together in several challenges, and he technically saved her from most likely being eliminated in the Talent Night challenge.

Throughout TDI, Bridgette and Harold remained friends, and she was one of those delighted with Leshawna and Harold's departing kiss.

Things in TDC were more dramatic, as Courtney and Duncan were aggressively against Harold, and Bridgette was friend to both him and Courtney; however, she stayed closer to Harold and her other friends when Geoff was eliminated.

When Harold accidentally consumed Gummi-Slugs and collapsed, Bridgette was the first to react and, along with Noah, possibly saved his life. She was by his side most of the time he was receiving medical treatment.

The contest continued with Harold and Bridgette casually being friends until his elimination, and when it came to the finals, Harold was rooting for Bridgette.

As TDB picked up, Harold and Bridgette continued to be friends during good times and bad times. But lately, things have taken up a notch.

Crystal once brought up fanon pairings, and mentioned Harold and Bridgette first. Bridgette felt it was silly, and merely took it as a compliment to her friendship with him. Soon, however, things would spiral out of control.

Geoff was at first too forward with Bridgette, and then he was suddenly guilt-stricken and staying away from her for mysterious reasons. Harold was one of those to comfort Bridgette and talk to her, and eventually he couldn't take Geoff's avoidance of her and started after him using his ninja skills.

During the Giant Monster VR, Bridgold (the fanon name for Bridgette-Harold romance) was a running gag, mentioned by many people as a note was left in the Janitor's Closet (by fanon-loving Crystal). Bridgette was so embarrassed that she started to avoid Harold, in hopes of not damaging her relationship with Geoff, or Harold's with Leshawna.

The Blimp Race challenge was a key point in where their friendship could be something more. Harold put on the cat costume that no one else wanted to, and Bridgette was all smiles and giggles, telling him how very cute he looked. Alejandro, a guest star teammate, was trying to seduce Bridgette, and Harold could see through his guise and tried to, with subtle means, keep him away from her.

The final challenge for the blimp race involved four different couples having to kiss. When Harold tried to prevent Alejandro from kissing Bridgette, Valerie started to insult the nerd. Bridgette came to Harold's defense, and, after a brief argument all around, the surfer girl kissed the nerd, for a bit longer than was needed.

After the challenge, Bridgette and Harold both felt guilty, the former more so. Bridgette talked to Crystal, the starter of the "Bridgold" rumor, and Leshawna, who admitted that things between her and Harold were rocky. The worst part for her was that Leshawna's parents believed Harold was too close to Bridgette, and thus she blamed herself entirely. Harold and Leshawna had a nice moment at the end of the blimp challenge, thus giving some hope to their relationship staying together, while Bridgette went on the reward ride (invited by Chico the Raccoon).

For now, it is hard to tell where Bridgette and Harold's friendship will go. The two are closer than they admit, with friendship and trust dating back to TDI. Both are still in relationships with others, but there obviously is a connection between the nerd and the surfer girl. 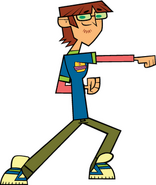 Bridgette.
Add a photo to this gallery

Retrieved from "https://totaldramacomeback.fandom.com/wiki/Bridgette_and_Harold?oldid=12951"
Community content is available under CC-BY-SA unless otherwise noted.