This article focuses on the interactions involving Bridgette and Ezekiel.

As most know, when Ezekiel said his ignorant comments in Total Drama Island, the girls, Bridgette especially, took offense and rallied to vote him off. Ezekiel was baffled by this to the very end of TDI, but as he watched the show from Playa De Losers, he found himself growing attracted to Bridgette when watching her; this confused him, as his conception of girls from the reality shows he watched was different than the tomboyish, kind-hearted nature she had.

When she was voted off, Ezekiel wanted to approach her, but felt too ashamed and down, also knowing she unofficially hooked up with Geoff. After Geoff was voted off too, Ezekiel was encouraged by Chris to act hip and use slang while being a hot tub with the new couple. Ezekiel didn't understand, but tried to follow his advice and get closer to Bridgette, but it only brought ire on her part. Ashamed further, he just wanted her from afar.

When TDC started again, Ezekiel was very regretful to rejoin, and tried to avoid the others. It came to the point where he had to interact, and he managed to earn their respect by winning a challenge. He then finally managed to talk to her, and explain (though a little inadvertently) why how he such a misconception of things. Bridgette was one of the first to forgive and forget, while Ezekiel was obviously still crushing on her.

This was played on by Chris Maclean, who had a bet running with Chef Hatchet that he could have Ezekiel and Bridgette start an affair. They were paired up in the prom part of the second challenge, and the cufflinks in the fourth challenge; all he managed to do was strengthen their budding friendship. Ezekiel admitted to Bridgette (and Tyler) what had happened with his parents and himself during the breaks.

One part of the contest that really made Ezekiel's crush come through was when they were paired together for the prom challenge, and he had to kiss her. She was friendly about it, and had to drag him along the way because of how nervous he was.

As the contest continued, the two became close friends, then he became to get close to Heather, who was at first planning to manipulate her. As Ezekiel felt that everyone deserved a second chance, Bridgette remembered how hurt one of her friends had been after a girl used him, and thus stood up to Heather and told her to stay away from Ezekiel.

Bridgette would go the extra distance by telling Ezekiel of her gal friends at home, and who would be compatible with him, trying to pair him up and get him away from Heather. It did no good, as Ezekiel did eventually pair up with Heather, though it was still shaky as far as Bridgette was concerned.

As the contest drew to a close, it came down to Bridgette, Ezekiel, and Izzy in the finals. The three were close, but agreed to give it their all. Bridgette and Izzy won in the end, but it was accidentally as they both were desperately trying to save Ezekiel from a giant octopus.

Bridgette and Ezekiel became the friends they needed most since the start of TDBG. Ezekiel had trouble with Heather (whom Bridgette still didn't like that much), and Bridgette was having trouble with Geoff. Both would spend nights after the challenges and voting ceremonies to talk, and discuss their problems. Heather was jealous at first over this.

Ezekiel became one of the few people Bridgette could talk to, as Bridgette's friends and companions were all but lost to her. Geoff began avoiding her like the plague (for voting off Trent, unbeknownst to her), Gwen was unreasonably cranky, and she pushed herself away from Harold and Leshawna when she feared she was the cause of them drifting apart. Therefore, Bridgette would rely on Ezekiel most for friendship. 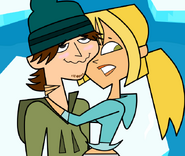 In an alternate reality, something like this may have happened between the two... Drawn by Bri. 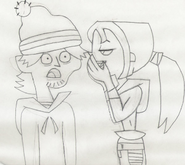