Bridgette grew up in a small west coast town and it shows. She was surfing before she could walk and when she walks, the other surfers can't help but to check her out. She may be as pretty as a daisy, but she's only coordinated on the waves. On land, she's kind of klutzy. She's been responsible for more than a few wipe-outs on her surf team (and they were all on land!). Luckily she's also got a healing touch. Bridgette's strongest attributes are her sense of humor and her creativity. She's a pretty laid back, go-with-the-flow girl, who's best friend is her mom. They both love flowers, crystals, and everything else that is part of Mother Nature's beautiful bounty. Bridgette's mom is proud of her not only because she's a giving person, but she's also on the honor roll at school. Bridgette signed up for Total Drama Island because she always tries to open herself up to new opportunities. She's already kite surfed off the coast of Peru, helped build houses in a third world country, and spent a summer making rugs in a monastery in Nepal. Bridgette's goal is to keep the vibe flowing a goodly way. That's why she volunteers at the local animal sanctuary. Everyone there loves her, and truly believes that not only does she understand animals, but that she can communicate with them. She's known as the "budgie whisperer." Bridgette hopes that her time on Total Drama Island will spread the message of body surfing and cosmic love to a larger audience.

Bridgette was the fourteenth/fifteenth to arrive, along with Harold in a surprise performance of water-skiing on her surfboard, after Geoff had pretended that things were not good between him and her. She mentioned to Harold that Courtney still had a grudge.

She and Ezekiel developed a great friendship throughout the course of the series, as well as being good friends with many of the contestants, especially Gwen, Leshawna, Harold, and DJ. Her greatest problems were losing her boyfriend from voting so early in, and also with Heather being manipulative and trying to use her new friend Ezekiel. Though Bridgette wasn't the best at challenges, most of the others loved her because of how sweet she was. Bridgette, though she denies the credit, was the one who saved Harold's life with her first-aid training when he suffered an attack from Gummi Worms. She became very good friends with Cody and Izzy. In the end, she and Izzy were the winners of TDC.

When TDBG started, Bridgette and Trent announced they were now step siblings, due to her mother marrying his father. The contest started off nice, but Bridgette was plagued with drama. First Geoff was too forward in their relationship and then suddenly distant and avoiding her like the plague. Gwen was almost impossible to deal with, the goth girl aggressively bitter over an unknown problem. Rumors began to fly around that she was romantically involved with her good friend Harold. It really got to her at times, and the only person she could turn to was her friend Ezekiel.

Bridgette has been seeing Geoff since mid-TDI, which officially started with her elimination there. She has been teased to like several other contestants, but she considers them all good friends.

In TDC, Geoff was separated from her early on in, but she constantly thought of him and called out to him in confessionals. Every time they were reunited, they would begin kissing and saying how much they missed each other. It was said she had visited him during the break between seasons.

Things have become rocky during TDB, where Geoff's overly excited comments about marriage made Bridgette a little worried he was going too far. Before they could fully deal with this concern, Geoff was forced into an alliance with unknown people, driving him mad with guilt and frustration; thus, he has started to avoid her and her friends, to prevent people asking questions and getting to know the truth. Bridgette suspects that he voted for Trent, who she's now related to, but has been trying to shake that and just talk to him.

Other than Geoff, Bridgette has been romantically interested or teased with Ezekiel, Gwen, and Harold; all of these are not official, especially not to Bridgette who considers them all very close friends.

Ezekiel, as she knows, has a big crush on her. When he redeemed himself, Chris Maclean was constantly putting the two together, hoping to cause Bridgette to cheat on Geoff with him and/or get Ezekiel to come onto her; however, this never happened, not even in the prom contest when the two were obligated to kiss (and even after Bridgette practiced with him). Bridgette has been close and protective of Ezekiel, trying to suggest her own friends as girlfriends when she was worried Heather was trying to use him. They are just friends still, and they confide in each other over issues like their partners and the competition.

Gwen and Bridgette have been good friends since TDI, and the only romance the two have had are two kisses, one in the yaoi-yuri dare, and another when Gwen seized her for a quick make-out session to win the fan service challenge. Since both girls are straight, it's just a tease overall.

Harold has been a good friend to Bridgette, the only friend he had on the Killer Bass during TDI. The two have always been friendly and close, with similar hobbies and friends. During TDBG, they were closer as the contest became more crowded and wild, while Geoff would worry her or distance himself. People have started to suspect that the two are falling in love, especially when the word 'Bridgold' was spread around (unintentionally) by Crystal. This freaks Bridgette out as she still loves Geoff and supports Harold with Leshawna. She has started to distance herself from her good friend in hopes of keeping these rumors down, which unbeknownst to her is confusing Harold.

Bridgette has survived the Zombie and Super VR challenges.

She saved Ezekiel during the Zombie challenge when he started to go berserk and slay zombies nonstop after Heather was killed. 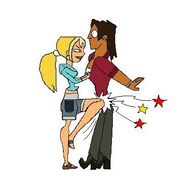 There goes any chance of Al Junior...

Bridgette's nightmare about Eva killing her

When Geoff and Bridgette are together, this is what's most likely to happen

Courtney, one of Bridgette's best friends

Ezekiel, one of Bridgette's best friends

Prom Bridgette and Geoff by Cid.

Retrieved from "https://totaldramacomeback.fandom.com/wiki/Bridgette?oldid=16862"
Community content is available under CC-BY-SA unless otherwise noted.