Arthur Bladeline, labeled The Loner Schemer (he resents the "schemer" part), was a contestant on Total Drama Battlegrounds.

Arthur the Schemer. Arthur hates high school. He hates that he had to spend so many years in school, and still one more. If he can, he plans to find a way to retire for life after school, so that he never has to work years at something; anything to avoid college. And that's why Arthur has joined this show.

Both of his parents are lawyers, so he's used to living life through loopholes and double-talk. Arthur thinks it's an interesting life, but as stated before, he doesn't want to go to college. Thus he's thought of a bunch of get-rich-quick schemes, some of which have got him in trouble.

A loner because he relates schoolmates to the school he hates, Arthur keeps to himself aside from sports. He loves hockey, swimming, and lacrosse, but if they could make team sports something you could do alone, he'd prefer it (also something he's tried to make real, but hasn't thought of a good idea yet).

One thing that he cannot stand is really girly stuff. Arthur has three sisters, the cute and girly kinds, and the amount of pink in the house makes him want to throw up. And that Twilight series, bleah! If he hears one more word about those vampires...

Though a devious schemer and lacking guilt, Arthur has one skeleton in his closet he'd prefer not get out: he's a major comic book fan. He loves Batman, X-Men, and zombie graphic novels, the former the most. He loves everything, the heroes and the villains, the motives and the plots. Still, he'd be mortified if those at school knew he would spend a couple hours every day reading comic books.

Arthur does not care who he hurts to win this contest. He is exceptionally bright and quick-witted, and will not stop until the prize is his. Who will he group up with, and will he back stab them? Will he have a change of heart? And what on earth is up with his hair? We've seen it before somewhere...

﻿Arthur's entrance was rather aggressive, as he struggled to get out of his entry car, and started kicking the side in his frustration over the driver almost killing him. He also balked at Valerie's extreme amount of pink.

Although he is a good competitor, Arthur has had troubles throughout the series with a combination of bad luck and bad publicity. He tries to shrug this all off, but it is obvious some of it causes him great ire.

He has tried to cover up his hidden nerdy side, but it has been exposed a couple times. Also, Valerie has forced him to vote at least once in a way he didn't want.

Officially, Arthur has no love interest. Unofficially, the teases have been there with Izzy, Sadie, and Valerie. Arthur has also shown attraction to his roommates, Anita and Belinda, but this has been mostly physical attraction.

Izzy was trying to get steamy, romantic events going on during the boat challenge, and asked the viewers if they wanted to see her make out with Arthur. When the results were poor, she decided not to, and though he put on a good face, he was furious at the viewers for denying him the chance to make out with Izzy.

Arthur has shown sympathy towards Sadie, and has tried to steer her away from Zachary, who he suspects (rightly) is trying to use her. He has not shown too much more interest in her, but isn't quite as negative to her as he would be to others (which says something, since he does not like girly girls who wear girly pink).

Valerie and Arthur was hinted when Crystal teased them about being a couple at the start. They hold animosity to each other, but when Valerie discovered that she had more freedom to pursue in the contest, she forced him to vote the way she wanted and planted a kiss on his lips.

Arthur has only survived one VR Challenge: the Super VR. 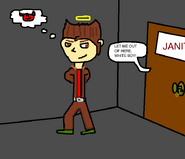 Arthur, who just locked Zachary in the janitor's closet by Ed

Arthur by Constorion89
Add a photo to this gallery
Retrieved from "https://totaldramacomeback.fandom.com/wiki/Arthur?oldid=14405"
Community content is available under CC-BY-SA unless otherwise noted.