The next challenge isn't exactly a walk through the park, it's a trek across the island with an animal buddy! But whether it's a little rat or a big and stupid crocodile, the contestants will have to deal with their own problems and issues, which might bring out the animal in them.

Two days have passed since the prom challenge. The episode starts with Bridgette hiding from somebody. The door of her hiding place opens, revealing Ezekiel's hat... being held by Eva, who has apparently killed everyone else. She wields an axe and prepares to kill Bridgette for betraying her. As Eva swings, Bridgette wakes up screaming, waking up everyone in her cabin. In resonse, Courtney hugs the surfer in an attempt to comfort her. Upon seeing Eva, Bridgette recoils, much to the weight lifter's confusion. Ezekiel, Harold, Tyler and Duncan, who also woke up from the scream, burst in wielding a bow, fists, a bat, and an axe respectively, wondering if there was a cockroach. In the confessional, Noah reveals that Bridgette woke up everyone in the Screaming Gophers Cabin.

In the mess hall, a few curious questions are directed at the surfer, as well as some nervous glances at Eva. In an attempt to change the subject, Bridgette asks Noah and Katie how the cruise was.

After the fake prom challenge's reward, Noah and Katie were back on Wawanakwa, and thus, Chris announced that it was time for a new challenge, this time involving animals. The campers would be split into several teams of 2 or 3 members, and had to take a random animal to the other side of the island. Harold ended up with a stupid crocodile that he named Stupid, Tyler got a goat he named Quarterback, Duncan got a pig that he named Dinner just to upset the pig-loving Beth, Bridgette got a zebra she called Charger, Ezekiel got a rat that he named Survivor, and Cody got a duck whose name would be Groucho.

In his pursuit of more drama (and ratings), Chris decided to team up people who couldn't stand each other or didn't share a good relationship (such as Courtney being in the same team as Gwen and especially Harold, Bridgette being paired with the person of her nightmares, and Heather being paired with her romantic tease Ezekiel). Other teams weren't so conflictive, though.

The teams began their two-long day journey to the other side of the island. During the trip, some of the teams bonded, like Katie and Cody. The BFFFL was interested in Cody's thoughts on girls, since she planned to pair him with her friend Sadie. Duncan and Beth eventually got along thanks to Trent's intervention, who played as the referee between the two. Eva had a very bitter attitude against Bridgette, but when the surfer girl stood up against her, the fitness buff praised Bridgette's guts, and from that moment onwards, they became friends.

Other teams, however, weren't doing so fine. Ezekiel and Heather were constantly arguing (mostly due to her), and when Ezekiel disappeared in a mudslide, Heather abandoned him so she could finish the challenge (although fortunately, Ezekiel appeared shortly after). Also, Courtney didn't hide the fact that she was unbelievably angry at Harold, and her unending fury towards him greatly upset Gwen, who told the CIT off when she lost her patience.

In the end, Bridgette and Eva won the challenge, which also allowed them to vote somebody of the losing teams, which would be Tyler, Izzy, Noah, Duncan, Beth or Trent.

Courtney decided to temporarily stop her revenge against Harold, and set in motion Trent's elimination as a payback for Gwen telling her off. Unbeknownst to her, Heather made everybody believe that it was Cody who planned the musician's elimination in hopes of getting hooked up with Gwen. Thus Gwen slapped him in her betrayed fury, leaving many shocked and hurt, including Courtney who had no desire to hurt Cody so bad.

After the episode's end, the reader's told about what happened with the animals of the challenge, including the events of a rather brave duck we would see more of in the future. Among them is that Stupid is killed by Groucho.

1. Happy Halloween, even if that's far far away or long past!

3. How about bringing an outhouse?

4. Crocodiles are not flushed down here

5. No Communist spies in here

7. In parenthesis, as always

8. Seriously there are always parenthesis here!

9. Get these parenthesis away from us!

10. We need our personal space!

12. In the not-too-distant future

13. Somewhere in time and space

14. Caught in an endless chase

15. There this evil gal who wants to rule the world

19. They cannot control when the challenge begins or ends

20. They'll try to keep their sanity with the help of their camper friends

23. If you're wondering how they eat what Chef cooks

24. And other campers weird facts

25. Just repeat to yourself, "it's just a reality show"

26. You unlike them, should really just relax

His first appearance into the game, exterminating stupid yet wicked crocodiles. 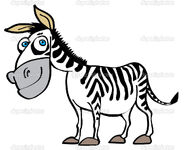 Charger the Zebra
Add a photo to this gallery
Retrieved from "https://totaldramacomeback.fandom.com/wiki/Animals_Crossing?oldid=15363"
Community content is available under CC-BY-SA unless otherwise noted.