Alfred Dennotin is the Friendly Gonzo, and is a contestant on Total Drama Battlegrounds.

It's time, baby! Alfred's in the house, and he's ready for action! So dudes and dudettes, prepare yourselves for some fun! Because as long as he's here, it will be!

Alfred grew up in North America, in the state of California, and recently his family moved up to Canada. Most of his friends in high school think he is the perfect definition of those wild and crazy Americans, but maybe it's just him. Alfred is wild, fun-loving, and quite loud.

Alfred doesn't take dares, because doing something embarrassing for someone else is degrading. Doing it yourself is far better, since it's all in fun when you're doing your own fun thing! He was spent a whole day at school moon walking, the next day Groucho Marx walking.

He is known to be a storyteller, but whether he's telling the truth or not is hard to tell. They sound believable, but did he really date a cheerleader back at his old high school? The head cheerleader? And do Americans really wear shorts around winter time? Boy, some of friends they all could be Californian girls.

Rather open-minded, Alfred has a wide selection of friends, guys and gals (and he really likes the latter). He has a powerful hatred for bullies and rude people, because he was treated poorly during his junior high years. So if you need a friend, just someone to talk to, Alfred is good to have nearby.

So how far will the American get in a competition full of proud Canadians? Is he wild and gonzo enough to endure the trials of Total Drama? And what girl is he really going to start digging, and possibly startle the heck out of everyone in the show?

Alfred debuted second in TDB. The truck which brought him to the stadium crashed into the platform﻿ and sent the boy flying out the windshield. Alfred simply jumped from to his feet, perfectly fine. He then fell unconscious due to a "caffeine crash" (he hadn't slept the previous night, and drank eight energy drinks to keep him awake until his arrival). Alfred didn't notice when Rodney and Mandy tripped over him. Sebastian also almost tripped over the teen, but caught himself and then proceeded to wake Alfred up. The two immediately began chatting and didn't notice Sandra's arrival. When Colin began threatening Rodney, Alfred shouted at him to "leave the kid alone". When the bully asked what he was going to do about it, Alfred responded: "Nothing, actually," but Sebastian was, who promptly knocked Colin unconscious via pressure points. Later, when Chris proceeded to trick the contestants into falling in a pool of water hidden under the platform, Alfred was the only one of the teens who say the prank coming. He then pushed Chris into the water and, after shouting out: "This! Is TOTAL... DRAMA... BATTLEGROUNDS!", jumped in himself.

During the first challenge, in which he had to face Owen in a chug-a-thon, Alfred managed to beat the larger teen, much to the astonishment of the original contestants. The boy soon threw up afterward.

Alfred has been romantically interested in the following: Bridgette, Daisy, Izzy, and Mandy. He really loves girls, and one of his main reasons for joining the show was to meet them.

His interest in Bridgette was from afar and started wrong when he called her the wrong name (he asked Howard who the really hot blond gal was, and Howard said "Lindsay"). Knowing that she's taken, he backed off and is on okay terms with her.

Daisy was comforting him when Sandra led the others to try and vote off him. She kissed his cheek for good luck, and also would playfully flirt with him. This stopped more or less when Daisy became more involved with Yoshi.

Izzy was attracted to the fellow gonzo after her break-up with Owen, and thus she got her new friend Mandy to tag along. The three worked together on the vampire challenge, and in the boating challenge episode, the three made a point about fan service, during which Alfred made out with Izzy and Mandy in different kinds of "fan service romance." After the challenge was over, Alfred and Izzy made out one more time in the Janitor's Closet.

Mandy and Alfred started off with little hints and a Vampire vs. Zombie conflict; however, this was all brushed aside by a combination of Alfred's friendly demeanor and the aforementioned fan service explanations. The ironic follow-up was after having made out with Mandy several times, he's now courting her normally, asking her about things no one has ever asked the cultist girl. He seems genuinely interested in her, and the courting continues. In the middle of the blimp challenge, while searching for the intern with coffee, Alfred complimented her once more. Mandy then pulled him in and began to heatedly make out with him. Whether this confirms the relationship or not remains a mystery.

Alfred has survived the Zombie, Alien, and Super VR challenges; he takes great pride in surviving the Zombie challenge, and gives a shout-out to Max Brooks when he survives this.

In the Vampire challenge, he was killed off-screen by a vampire when his partners were distracted. In the Giant Monster challenge, he stood against the giant platypus with his RPG-7 and failed, and was stomped on when he shouted his want for a crowbar. 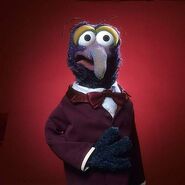 The Great Gonzo, inspiration for Alfred's character.
Add a photo to this gallery

Retrieved from "https://totaldramacomeback.fandom.com/wiki/Alfred?oldid=16355"
Community content is available under CC-BY-SA unless otherwise noted.